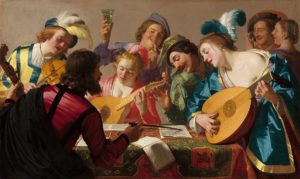 The Music and Visual Culture in Renaissance Italy Conference was held at the University of Sheffield from Thursday 13th June to Saturday 15th June 2019 and brought together an international assemblage of historical musicologists, musicians, historians, art historians, and acousticians specialising in the relationship between the visual and the musical from the late 14th to the early 17th century in Italy. The conference was organised by Tim Shephard (University of Sheffield) and coincided with the celebration of the publication of the book ‘Music in the Art of Renaissance Italy, c.1420–1540’ (Harvey Miller Publishers 2019) that resulted from a three-year collaborative project funded by the Leverhulme Trust and hosted by the University of Sheffield.

The three-day programme explored the intersections and interactions between the sister arts, with notable presentations centred around the binary themes of sensoriality and materiality; temporality and affect; and identity and technique. While initial panel groupings highlighted the various roles and spaces of music, the presentations revealed shared vocabulary, sources, and imagery that transcended function and environment. Analyses of writings by Alberti, Aretino, Comanini, da Vinci, Gaffurio, Tinctoris, and Zarlino unveiled interpretational nuances that prompted deliberation amongst the participants. Keynotes by François Quiviger (Warburg Institute) and Flora Dennis (University of Sussex) bookended the three-day conversation on early modern music and image culture.

Discussions of the comparative arts began with David E. Cohen’s (Max Planck Institute for Empirical Aesthetics) examination on the concept of harmony and harmonic proportionality. Cohen traces the development of the term harmonia from classical Greek literature, to the writings of Ramos de Pareja, Burzio, Gaffurio, and da Vinci. Discourse on the simultaneity of harmony and the simultaneity of viewing led to the consideration of temporality, a theme central to Sophia D’Addio’s (Columbia University) investigation of northern Italian painted organ shutters. As objects in motion, the shutters provided a visual accompaniment to the organ’s musical practice, thus generating a dialogue between the interior and exterior spaces through the process of opening and closing. The performative associations of the door-like shutters contribute to the multisensory experience of the mass and urge viewers to read and experience images. Evan MacCarthy’s (West Virginia University) question—’What does it mean to be erudite in art and music?’—prompted an analysis of treatises by Tinctoris and Alberti that reveal a distinction and judgment between the old and the new. Such judgment led to discussions on the training of the senses and depictions of the worthy or the learned as explored in numerous papers throughout the conference.

A number of publication projects will emerge from the Music and Visual Culture in Renaissance Italy Conference in the coming months. The conference was generously supported by the Royal Musical Association, Music & Letters, the Royal Historical Society, Harvey Miller Publishers, and the Society for Italian Studies.