The Dialectics of Modernity

In the past few years, I have been working on a project entitled The Dialectics of Modernity: Modernism, 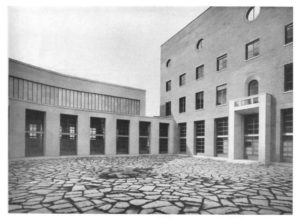 Modernization, and the Arts under European Dictatorships which was funded by the AHRC (September 2016-September 2018). As a Leadership Fellowship, the project involved several younger colleagues who were fundamental to achieving its aims (Drs Laura Pennacchietti, RA, Chiara Berrani, Gianmarco Mancosu, Silvia Colombo; and Anna Lanfranchi for the database and online exhibition). The project investigated the arts’ system contribution to the existence of the Italian Fascist dictatorship. To this end, the project analysed the interconnections between aesthetics and politics as they emerge from debates on literary, cultural, and artistic journals and from a selection of artefacts, spanning novels, buildings, paintings, sculptures, films, theatrical plays, photographs, newsreels, journal covers, and advertising posters. Our central hypothesis was that the arts as a system proved foundational in shaping totalitarian practices in three key ways. Firstly, the arts contributed to the anthropological revolution, which was a political and a cultural tool the regime used to mould the notion of the New Man/Woman and to sculpt an individual who was capable of being a social and collective subject through rituals, ceremonies and collective gatherings. Secondly, the arts fostered the development of utopian views about new civilisations and social configurations, for example through urban developments to improve living conditions. Lastly, the arts produced a repertoire of images and tropes often displayed in public buildings (stadia, post-offices, advertisement, for example) that circulated within Italian society and forged ways of thinking about the individual made collective. What was the potential contribution that the arts, as a system, could bring to bear upon the public sphere when functioning under the overarching notion of State art? We answered this question by producing several outputs: a website, and a monograph which is connected with the said website.

The website was designed with the support of the IT research team at the University of Manchester and in its final stages by Louise Lever, who developed a bespoke Research Software Engineering for the Graph. Technically, such development has necessitated multiple solutions to achieve its goal: 1) Database and free-text parsing to combine the explicit relationship between the data entities as defined in the body of work, with the implicit relationships that are only derived from exploration of the dataset; 2) Mapping of the entities and relationships to a suitable graph model for interaction; and 3) Bespoke web-based visualization application to render the network graph and deliver custom filters and mappings to representations that befit the type of data. Needless to say, much of this was totally new to me, and it was always challenging to find a common language between the languages we all spoke.

But a website was not the only way to disseminate the project’s results: a monograph entitled Architecture and the Novel under the Italian Fascist Regime by myself and Laura Pennacchietti at the same time produced a narrative about the interactions between two of the fields under examination and visualised those interconnections that we had identified by mapping the entries of the website (containing a database but which is not a database). The monograph was published as Open Access because it should be read online to access the website and, perhaps, multiply the points of observations and the arguments in a process of mise en abyme that a standard monograph usually cannot put forward (well, unless you are André Gide).

Whether the experiment was successful, or not, I do not know, but it was intellectually stimulating and there should be more to come in the near future.