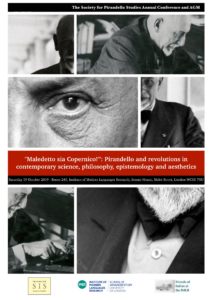 ars from various universities with the intention of presenting innovative research about Luigi Pirandello’s work in science, philosophy, epistemology and aesthetics.

Over the course of the day, six papers were presented by researchers of international standing from the United Kingdom, the Netherlands, and Belgium. Fabio Tonino (Warburg Institute, London), Federico Filauri (IMLR, London) and Guido Bartolini (Royal Holloway) chaired panel discussions and posed interesting and (sometimes) challenging questions to the speakers and the audience.

After the welcoming statements from the president of the society John C. Barnes (UCD), and the opening remarks from Katia Pizzi, representing the hosting institution IMLR, Valeria Taddei (Oxford) commenced the morning panel with a paper titled “The Science of Why: Pirandello, Bergson and the Epistemology of Intuition”. Drawing a comparison between Pirandello and Bergson, she analyzed the human faculties of intelligence and instinct, discussing how Pirandello attempts at conciliating them. Matthew Mild (Keele) followed with his research “Pure Bliss for Neurometry: I vecchi e i giovani’s Neurofiction and Carter-Rushdiean Breakthroughs”. He offered a cutting-edge reading of I vecchi e i giovani (1913) in the light of Neurofiction and Gender Studies, dealing with the idea of the double, the character’s neuroplasticity and the numerous representations of masculinity and Italianity in the novel. Andrea Brondino (Warwick) then presented a paper titled “Pirandello, Eco, Rorty: Shifts in the Ethics of Humour, Comic and Irony”, in which he dealt with the coupling of humor and literature. He put a variety of sources in conversation— Pirandello, Eco, Rorty, Kierkegaard, and Ferraris—and discussed the many definitions of humor.

The afternoon panel started with Alberto Godioli’s (Groningen) talk about “The Posthuman Comedy: Balzac, Pirandello and Animality”. He analyzed Balzac’s influence on Pirandello’s work, then focused on the sense of cosmic detachment which helps creating a posthumanist representation of human life, and used the “thresholds of the text” (foreword and epilogue) as examples of how Pirandello often puts the story “in posthumanist brackets”. Santi Luca Famà followed with a paper titled ““In the Blissful Unconsciousness of Beasts”: Nonhumanity in Luigi Pirandello’s Novelle per un anno”, where he analyzed Pirandello’s stories focusing on human-nonhuman encounters through a matrix relying on the variables of familiarity and stance. Bart Van Den Bossche (Leuven) presented “Starstruck: Imagination and Cosmology in the Novelle per un anno”; he discussed metaphorized cosmology in Novelle per un anno and discussed the stylistic similarities between scientific papers of the early 20th century and Pirandello’s short stories.

After the last presentation, Guido Bartolini projected “Cosa resta dei poeti: A Funeral Tea Party” directed by Paolo Rambelli, a clip on Pirandello’s wishes regarding the disposal of his body after his death and on the troubled events leading to the execution of his wishes.