The Voice(s) of Primo Levi: On the Centenary of his Birth 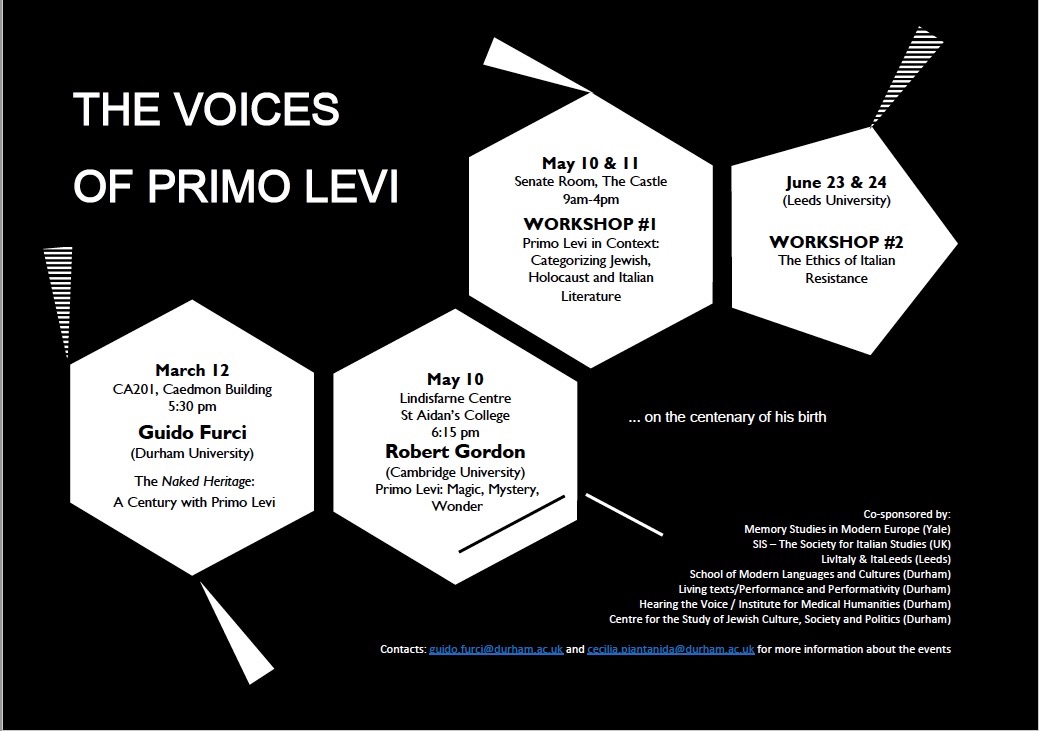 Our opening event was a keynote lecture by Prof Robert Gordon (Cambridge) on ‘Primo Levi: Magic, Mystery, Wonder’ (10 May) highlighting the value of thinking about Primo Levi’s work through an interdisciplinary angle. It was followed by the workshop ‘Primo Levi in Context: Categorizing Jewish, Holocaust, and Italian Literature’ (11 May).

Using the concept of ‘vocalità’ as a focal point, contributors raised key critical and methodological questions. The intention was, on the one hand, to evaluate the relevance of Levi’s thought today, on the other, to gauge the possibility of applying some of the most recurring concepts in his work (e.g. ‘grey zone’) to contexts other than Levi’s own discourse. Particular attention was payed to the themes of forgiveness and individual and collective responsibility, also in relation to the postcolonial debate and the various issues raised by the ongoing discussion on migration. The powerful synergy between the speakers and the numerous participants, who actively intervened in conversations and roundtables, gave ample opportunity for in-depth investigation of these topics.

The invited speakers of the workshop, Dr Kathryn Brackney (Yale University / VWI, Vienna), Dr Zoe Roth (Durham University), Prof Derek Duncan (St Andrews University), and Prof Stefania Lucamante (The Catholic University of America) explored different aspects of Primo Levi’s many contemporary voice(s) (see programme below). All papers had different yet complementary angles, maintaining a comparative, interdisciplinary and diachronic approach. We are confident this important groundwork will spur further investigations in the future. In particular, we envisage it will be a useful starting point for the study of Levi’s poetic production, which, despite being central for anyone concerned with the issue of ‘vocalità’, remains largely unexplored today.

To foster scholarly exchanges in this direction, the journal Lettere Aperte has collected contributions for a special issue on ‘Witnessing in Verse’ aimed at expanding on the topics of our workshop (see call for papers below). ‘The Voice(s) of Primo Levi’ will continue next year in Paris, with similar initiatives. We very much hope that the events in Durham may represent a starting point for renewed collaborations among European scholars of Primo Levi’s works and of his political and intellectual heritage.

Please find here a link to the workshop programme: https://www.dur.ac.uk/mlac/news/displayevents/?eventno=42643