The Taste of War: Values and Meanings of Food in WWII Italy and France 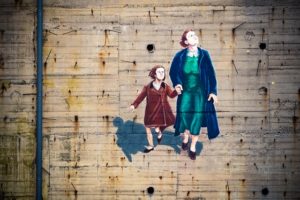 The topic of food in wartime lets us step inside people’s daily life, makes us analyse people’s memories and dreams as well as consider national and foreign food policies in their interactions with national and international politics. The conference, ‘The Taste of War: Values and Meanings of Food in WWII Italy and France’ held at Senate House on 5 July 2019, and organised by Dr Patrizia Sambuco (IMLR) and Dr Katia Pizzi (IMLR) for the Centre for the Study of Cultural Memory, brought together specialists in French and Italian history, literature and culture to discuss the material and imaginary importance of food in wartime Italy and France.

The conference opened with a keynote address by Kay Chadwick (Liverpool) focused on food as a means of propaganda used by both the Vichy regime and by Free France in London. As an expert on radio propaganda in WWII France, Chadwick analysed the Vichy radio propaganda and the BBC’s French Service, the main means of communication of Free France with metropolitan France, and reconstructed the dynamics of their food propaganda. Bread is a prominent element of Chadwick’s analysis as it is for the study by Karima Moyer-Nocchi (Siena-Roma Tor Vergata) on Italian society from the fascist period to the high peak of the Resistance fight. She looked at the psychological, political and national importance of bread in that period making use of documents of the time, recipe books and oral testimonies.

The paper by Paula Schwartz (Middlebury) discussed food protests in Paris, highlighting the fundamental role of women. Patrizia Sambuco (IMLR) examined food protests in Italy and their representations in the women’s journal Noi donne and contrasted them with the function of food-related stories in Italian women partisans’ memoirs.

The following session on Allied food aid was opened by Teresa Fiore (Montclair) who discussed the alimentary and cultural dynamics in Sicily at the time of the Allied landing. Starting from a reading of Sciascia’s ‘The American Aunt’ and contrasting it with the views by Sicilians who experienced the 1943 landing, Fiore allowed a nuanced understanding of those food dynamics. Lisa Payne Ossian’s paper also focused on America and in particular on its role in the effort against famine in the immediate aftermath of the war.

The afternoon session opened with the paper by Marta Brunelli and Anna Ascenzi (University of Macerata, IT) who discussed how the fascist regime put in practice what they call a ‘war pedagogy for women’, an educational system aimed to educate women in home economics, food hygiene and home production needed in wartime. Maria Grazia Scrimieri (Côte d’Azur) analysed the recurrence of food related episodes in the novel by Renata Viganò, L’Agnese va a morire and explored the recognition -or lack of recognition- of women’s work during the Resistance. Tommasina Gabriele (Wheaton College) provided a perfect conclusion to a day rich in comprehensive analyses and new perspectives by looking at how in Alba de Céspedes’s Dalla parte di lei (1949) food becomes a symbol for gender and socio-political critique of fascist and post-fascist Italy.

The conference was sponsored by the University of London Cassal Fund and by SIS.