The books and the series — as well as the projects funded by the ‘Translating Cultures’ theme of the UK’s Arts and Humanities Research Council which were their point of departure — address the formation and articulation of national cultures as the result of multiple forms of mobility. Contributors focus on how migration, imperialism, commercial trade, translation and exchanges of ideas have shaped cultures, languages and nations, in contact with and under the influence of transnational networks that exceed national boundaries and remind us of their porosity. While the nation continues to be a powerful point of reference, a transnational approach unhinges its centrality and favors a critical perspective on the dynamic tension between the national and the transnational, which highlights cross-pollinations, linkages and reverberations across time and spaces, offering a new, connected vision for Modern and World Languages in the 21st century.

Charles Burdett set out  the scope of the series, its aims and its target audiences, while Loredana Polezzi examined the notion of ‘the transnational’ and its relationship with other key terms such as ‘diasporic cultures’, ‘globalization’ or labels such as ‘francophonie’ and ‘lusofonia’. The four editors then directly and indirectly used Italy, a crossroad of cultures with a layered history of conquest, diaspora, colonialism, immigration and regionalism, in order to illustrate the transnational approach using examples from the two books. 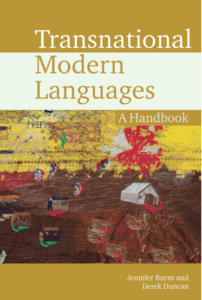 Jennifer Burns and Derek Duncan explained that A Handbook comprises more than 30 essays based on ‘keywords’ which contributors from across different language areas use as prompts to reflect critically on the study of language and culture in a transnational frame. They focus on research questions rather than area knowledge so readers may rely on their own experience and expertise to create new configurations of transnational knowledge. The essays draw on a wide range of cultural media from the medieval period to the present day. Language and language diversity are recurrent concerns as markers of social exclusion as well as self-expression. What is perhaps most stimulating about the collection are the unexpected and illuminating connections identified across differences of theme, method, and scale as well as of geography, time, and of course language itself. 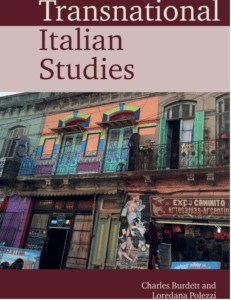 Charles Burdett and Loredana Polezzi then concentrated on the key notions of language, temporality, spatiality and subjectivity, tracing their presence across multiple contributions in Transnational Italian Studies. Mobility appears in the shape of migration, travels of discovery, colonial occupation, cosmopolitanism or exile. Subjectivity encompasses dimensions of belonging as well as questions about transnational activist and protest networks. And even the most canonic figures of Italian culture, such as Dante, are presented through a lens that foregrounds the layering of interpretation, translation and appropriation which characterizes their continuing presence and significance across space and time.

The conversation was in part tailored around the specific learning environment of MSU, a Hispanic-Serving Institution as per a federal designation, where a transnational model relying on intercomprehension and translanguaging is adopted in the course “Italian for Spanish Speakers”, a learning environment in which the transnational experience of students debunks the concept of a minority with needs to enter the mainstream and gives them center stage as pluri-cultural subjects able to enrich and complicate the mainstream itself.

The stimulating vision illustrated by the presenters produced equally stimulating comments during the Q&A section. The two respondents, Giulia Riccò (University of Michigan) and Serena Bassi (Yale University) of the Transnational Italian Studies Research Network (MLA), highlighted the need to understand the actual impact of this vision on existing language programs and to disrupt the current homogeneity of Italian Studies. A provocative question from the audience pointed at the risk of alienating students interested in traditional views of national cultures and questioned, intentionally playing the role of devil’s advocate, the idea proposed by the presenters that the native speaker is an invention and that in a pluri-language classroom the conventional hierarchy teacher-student is productively challenged by the mutual exchange of knowledge.

Through participants active in programs of Italian from around the U.S., from UCSB to Santa Clara U, San Diego State U, Brandeis, CUNY, Duke, Wesleyan, and UPenn, including programs in the UK (Cardiff), Belgium (Leuven) and Ireland (Galway), the presentation and Q&A discussion made tangible the desire to learn about concrete applications of the transnational model, tweaking existing courses, proposing new ones, and re-organizing introductory courses and sequences, so that languages and cultures are part of a trans-disciplinary approach that makes them the fulcrum and not the appendix of this rethinking. A fruitful segue to this event would then be to offer workshops on how to “do” Transnational Studies in our classrooms.