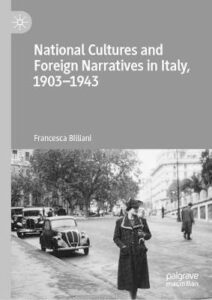 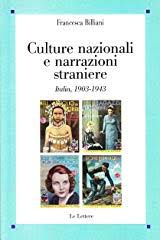 After 13 years from its first appearance, Francesca Billiani’s seminal work on the role of translation in the building of Italian National Cultures has been translated into English (National Cultures and Foreign Narratives in Italy, 1903–1943, translated by Georgia Wall, Palgrave Macmillan 2020, original title: Culture nazionali e narrazioni straniere. Italia, 1903-1943, Le Lettere, Firenze 2020). We have asked the translator and the author to present this new enterprise.

Translating National Cultures and Foreign Narratives was daunting and liberating in equal measure. Daunting in that while I imagine translating a text recognized as seminal always brings with it a weighty sense of responsibility, this is surely especially true when the text in question deals so thoroughly with the processes and impact of translations! Among the wealth of archival material featured in the text is a letter (chapter 6) in which Cesare Pavese tells translator Luigi Berti, ‘your text strays, especially in passages where the stylistic value is key […] why abolish those meticulously dropped adjectives and adverbs’; going through my translation, this critique was at the forefront of my mind! My text certainly strays in form on occasion, but what struck me about the original were the subtle shifts in Francesca Billiani’s authorial tone – from a more detached, scrupulous analysis to the enthusiastic observation of incidental events, interspersed with playful irony – and my choices represent an attempt to recreate an element of this in English.

I earn my daily bread primarily by providing advice for academics who have been asked to review their written English. Quite often, this means grappling with stubbornly poetic turns of phrase and structures and forcing them into a standard format (‘this is what I’m going to say, this is why it’s valuable, this is what I’ve said, and just in case you missed it, here’s why it’s valuable again), one deemed to be appropriate for an anglophone academic audience. In this sense, translating National Cultures and Foreign Narratives was liberating, in that helping transport a fully-fledged Italian book into English – that is, a book born within a different set of writing conventions – meant engaging with diverse structures and styles rather than supressing them.

In a recent talk to mark International Translation Day, ‘Who is This Mythical English Reader?’, translator Gitanjali Patel suggested that the ‘English reader’ is best understood not as a person or a community, but as ‘a system or a structure that shapes the way the industry runs’. She was commenting in relation to literary translation in publishing, but it seems to me that this statement is particularly applicable to contemporary academic writing in English, where the current emphasis on making evident the value of a given contribution has shaped – and continues to shape – the form of academic contributions. So although Palgrave’s word limit for the translation meant the original text had to be cut significantly, these edits were undertaken with a view to preserve the analysis and the compelling details of the original, right down to the last footnote. (As a reader and as a translator, I was intrigued by a footnote commenting on the exchange between Ginzburg and Einaudi during Ginzburg’s period of internal exile: the image of Leone Ginzburg in a bleak Abruzzo, cramming his thoughts onto a postcard to Einaudi, begs further attention!) So yes, there are details which may not be of immediate explicit value to the central arguments of the book, but they are key in offering a broader panorama and more precise insight into the contexts in question. They also present the reader with a vast range of productive future research pathways…

When I asked Georgia to discuss her work as the translator of this book I wanted to make the translating process visible and give it the credit it deserves within the academic community. When I read the blog Georgia sent me I was almost surprised that, what was obvious to me, was also clear to the person who translated the book. And, yes, liberating is the right adjective: academic writing is more now than before hostage of rules which, if too rigorously followed, can only take freedom away from the reader, a reader who in my and everyone writerly mind should always remain an astute and knowledgeable interlocutor.