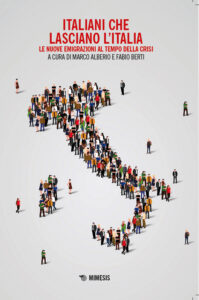 While recent migration from Italy is a recurrent topic in Italian media and politics, there appear to be substantial gaps in the scholarly study of these ‘new’ migratory flows. The recent publication of a collective volume based on original research, Italiani che lasciano l’Italia. Le nuove emigrazioni al tempo della crisi (Milan: Mimesis, 2020), is therefore a timely, welcome contribution to debates on Italian migration. This volume was presented on 23 February 2021 at an online event organised by Italian Studies at Oxford (ISO) in collaboration with the Inserra Endowed Chair at Montclair State University (USA), the Italian Sub-Faculty at the University of Oxford, and the Italian section of the Department of Foreign Languages at the University of Bergen (Norway). The editors of Italiani che lasciano l’Italia, Marco Alberio (Università di Bologna) and Fabio Berti (Università di Siena), were joined in conversation by ISO Co-ordinator Guido Bonsaver and two discussants, Teresa Fiore (Montclair State University) and Monica Miscali (Norwegian University of Science and Technology) (To watch the recording of the event click here).

According to the editors, simplistic notions and fuzzy terms are often used with reference to new Italian migrants, in both specialist and non-specialist debates. During the event, Alberio and Berti reflected on how the hardship of migratory experiences tends to be concealed by the use of reassuring (self-)definitions such as ‘brain drain’ or ‘mobility’, as well as ‘expats’ instead of ‘migrants’. The editors highlighted the complexity of the phenomena under investigation, and the great variety of milieus in which they take place – from the different origins of new Italian migrants, to differences in their destinations (the urban contexts of Montreal, Paris, London, New York, Berlin and other major cities feature prominently in the volume). At the same time, especially Berti argued that ‘migration’ and ‘migrant’ remain the most honest words to describe those phenomena and the people involved in them. Other data presented in the volume and discussed during the event further undermined conventional views. The Italians who have recently left Italy are not always part of a successful elite who has nothing to do with (the equally simplistic image of) migrants reaching Italy from poor, war-ridden countries, or with the mass-scale Italian migration of the past. Following the 2008 financial crisis, the number of Italians abroad has increased by 70% and Italy is now ninth in the world ranking of countries with the largest number of emigrants. Only about a third of Italian migrants actually hold a university degree.

As pointed out by one of the two discussants, moreover, even within groups that seem to match the notion of highly-qualified human mobility more closely, the pursuit of attractive careers often entails an endless series of stressful moves from one country to another. Miscali exemplified this experience by referring to academics in fixed-term positions, who (despite being often referred to as ‘early-career’ or even ‘young’ scholars) have in fact many years of professional and personal ties to different countries. They seek highly-competitive jobs in their field wherever such jobs become available, and they are therefore in a very different situation from that of recent graduates who decide to spend a period abroad much more light-heartedly in search of less defined professional and personal opportunities.

Italiani che lasciano l’Italia focuses on new migrations as a specific object of study. Nonetheless, the discussants and other participants made comments which showed how the volume also offers stimulating links to the study of migrations in general – with their mix of aspiration, liberation and enrichment, but also of loss, disappointment and precarity – and ‘old’ Italian migrations in particular. Fiore and others referred, for instance, to the history of Italy’s diasporas and the often rather feeble links between different generations of Italian migrants.

Other comments were made by the audience which pointed towards open questions and future research (the Coronavirus pandemic inevitably came up, although its impact could not be taken into account in a volume that deals especially with the 2009-2019 period). In response to this feedback, Alberio identified interdisciplinary research as a fruitful way forward. Indeed, while Italian migration is an obvious interdisciplinary topic, many recent projects and publications – not only monographs, but also collections – are dominated by cultural studies, literature, (socio)linguistics, sociology or by a combination of a few of these and other disciplines, thus leaving plenty of room for a deeper and wider cross-fertilisation of different disciplinary perspectives.