Adina and Dumitra: From Marginalisation to Friendship and Care 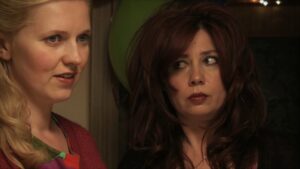 As an instructor of Italian language and culture who commits to promote students’ sensibility for EDI issues, I am constantly looking for content and activities that allow students to reflect on these issues and enact an inclusive classroom environment. The short video “Adina e Dumitra” focuses on the marginalisation of elderly people and immigrant women working as “badanti” (caregivers) in contemporary Italy. The portrayal of the lives of caregivers Adina and Dumitra, and “signor Rossi” and “signora Marina”—the two elderly people they respectively take care of—raises questions about the pressure of conforming to cultural and social stereotypes and the four characters’ poor social relations. Addressing these questions is the aim of the in-class activity I designed for a language course (beginner or intermediate level). The activity starts with two brainstorming sessions lasting five minutes each (BS1 and BS2). In BS1, students are asked to share adjectives and nouns that describe how, in their opinion, contemporary neoliberal society perceives immigrants. In BS2, they engage with the same activity focusing on elderly people. In beginner-level classes, words can be either in English or Italian (when in English, I provide a translation at the end of the two sessions). Moreover, when teaching online, Mentimeter is an excellent solution to reproduce the boards we would have in a classroom. After the two sessions, we dedicate a few minutes to a reflection on the meanings of the words. 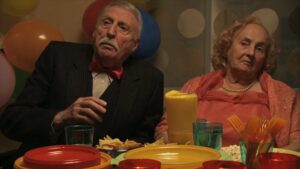 I have used this activity a few times and the words usually resonate with forms of marginalisation these classes of people undergo: immigrants are “sporchi” (dirty), “illegali” (illegal), “poveri” (poor) and “un peso” for society (the actual English word was “burden”); elderly people are “lenti” (slow), “deboli” (weak), “inutili” (useless) and, again, a burden for society. The picture these words depict is grim and it effectively summarises the views students encounter in mainstream media narratives as they grow up. My goal is to subvert these views and increase students’ awareness of how they are increasingly naturalized. And how is that possible in a beginner-level language class? As I want to emphasize the relation of care between Adina and Dumitra and the two elderly people that the video portrays as friends, fellows rather than “customers” or “employers”, I combine the video and the brainstorming sessions with an exercise on Italian pronouns and the grammatical relations they create between people and objects. Students ask each other and answer questions using pronouns and a list of verbs/actions. For example:

At the end of the exercise, we go back to the words on the boards and wonder whether the view and the narrative they embody are the same we found in the video. The answer is usually much more complex than a mere “No”. Students come up with other nouns and adjectives: “cura” (care), “amicizia” (friendship), and “generosa” or “gentile” (kind). The realization that the grim picture of the first two boards embodies a set of narratives and views that can be challenged and decolonized is the most relevant achievement of this activity. Moreover, this exercise shows how the study of Italian language and culture can become an effective point of entry for the discussion of EDI issues in the classroom.