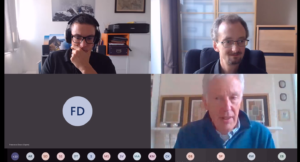 al time, in May. However, the unprecedented pandemic intervened and the conference was postponed, eventually taking place entirely online on the 10th and 11th September. Although this initially presented itself as a problem to be overcome, whose only solution presented several limitations (most notably the lack of informal networking that conferences usually allow), we soon realised that it also presented a range of new and interesting opportunities. Firstly, we could incorporate both synchronous and asynchronous delivery, allowing some presenters to provide both longer pre-recorded presentations and shorter digests within the individual panels and thus more effectively tailoring their work to a diverse audience comprised of both interested specialists and the more casually curious. Secondly, it facilitated the participation of a much wider range of presenters due to the elimination of accommodation and transport costs, facilitating the involvement of postgraduates and precariously employed colleagues and those coming from as far afield as the US, Canada, Australia and much of Europe. Thirdly and finally, it allowed the recording of live events to allow colleagues to dip in and out of all four parallel panels without being constrained by time and scheduling demands.

Hosted by the University of Kent and organised by Dr. Alvise Sforza-Tarabochia and Dr. Alex Marlow-Mann, this year’s event took as its theme ‘Visions of Italy’, emphasising the fundamental importance that the visual has played in the construction of Italian identity (both on the part of Italians themselves, and from abroad) and our contention that visual cultural studies and related methodologies have thus far received insufficient attention within the field of Italian studies. The conference was thus divided into four separate strands, which ran in parallel, dedicated to ‘Visual Cultures’ (including art, craft, design, advertising and fashion), ‘Literary Visions’ (including visualisation within and of literary works from the medieval period to the present), ‘Cinematic Visions’ (which showcased both national and transnational approaches to Italian cinema, television and screen studies) and ‘Visions of People and Place’ (which focused on issues of representation of Italians, Italian places and specific Italian themes in a variety of media and contexts). All told, 46 separate and themed papers were delivered across these strands by postgraduates, early career researchers, lecturers and senior professors and researchers, as well as figures from a range of related professions including curators and architects.

For this theme, a natural choice for keynote was Stephen Gundle, Professor of Film and Television at the University of Warwick, whose extensive and wide-ranging publications have frequently applied a cultural studies methodology to a wide range of different visual media. His presentation, entitled ‘Postcard Nation: Place Branding and Popular Italian Visual Culture’ addressed a medium almost entirely absent from scholarly discourse, but which he convincingly argued has played a key role in articulating national identity: the picture postcard.

Overall the conference was a considerable success and provided an excellent opportunity for colleagues living through difficult circumstances, and often cut off from their usual work environment, to come together and exchange ideas. Looking back, it is perhaps also fitting that a conference on such a theme should have been forced by circumstances to mediate its delivery through a new audio-visual technology.

In the picture: Conference organisers Alvise Sforza-Tarabochia and Alex Marlow-Mann, keynote Stephen Gundle and conference delegates on Teams for the keynote address.