Currently in its eleventh year, like most other events during 2020-2021 the UCC Dante Public Lecture Series had to change tact in a number of ways: it embraced the new online ethos and therefore sought out a completely new audience; it also served to highlight the establishment of the Centre for Dante Studies in Ireland, or CDSI as I will refer to it from now on, at University College Cork. Added to this was the consideration of how to mark the Dante septicentennial celebrations in a fitting manner. In previous iterations of the series, alongside Italianists and professional Dantists, speakers were mostly drawn from diverse fields – academic and creative; however, this year the line-up of speakers was selected from the cutting edge of Dante studies, on both sides of the Atlantic, which was fitting given the anniversary.

The series was opened by Professor Zygmunt Barański (University of Cambridge / Notre Dame) with a magisterial lecture titled: ‘“Di ramo in ramo”: Faith and Imagery in Paradiso XXIV’ in which he proposed a re-reading of Dante-pilgrim’s examination of faith and problematized further the nature of faith in Dante, that is, the faith by which unseen things are believed. Barański deftly argued that an examination of faith has no place in Paradise (following William of Saint Thierry) and its dramatization here speaks more to the salvific function of Dante and his text. Indeed, faith was the central concern, or rather the breaking of it, in the subsequent lecture, the exquisitely nuanced ‘Belief in Hell: Breaking Faith in the Circle of Violence (Inferno 10 and 13)’. Prof. Alison Cornish (NYU and President of the Dante Society of America), opened out the significance of faith to include other meanings which go to the very heart of human bonds and interactions. She argued that the Commedia bothers us not because it is old (Homer is older after all), and not because the religious assumptions which prevailed as it was written are largely contested and rejected; it bothers us precisely because it remains close to us – its ideology, its religion still haunt the present. Cornish’s multi-layered lecture highlighted the situation in Dante’s text linking it to our own time when people do not see the same present, do not see the same facts and disagree with what is happening before their eyes.

The following week Professor Simon Gilson (University of Oxford) spoke on ‘Ingegno in Dante: Ingenuity and Creativity in the Commedia’. This wonderful lecture explored Dante’s use of the untranslatable term “ingegno” in the Commedia. After first examining Dante’s own definition as set out in Convivio (2.11.15; 2.12.4), Gilson considered the rich patrimony from which the term is drawn, from Isidore of Seville, Papias of Hierapolis, William Conches to Bernardus Silvestris and Alcher of Clairvaux. He next set out to provide an enriched sense of what the term meant in Dante and his culture, and interrogated the way he privileges its use in relation to his own native talent and creative powers as a poet – thus becoming almost a metapoetical marker. The penultimate lecture was delivered by Professor Lino Pertile (Harvard University): ‘Luxury and Greed in the Divine Comedy’. The lecture expertly re-considered Dante’s complex articulation of greed and situated the poet in his historical context – a time of tremendous monetary, mercantile and political upheaval. Dante wrote against the backdrop of the painful transition of the medieval world to the modern era, a transition from aristocratic pride to bourgeois covetousness. Pertile convincingly argued that Dante wrote the Commedia in part to stop this process, to reverse the changes that were occurring under his eyes.

As a way of bringing the 2021 Series to a close, the organizers changed the usual final lecture slot format and utilized the occasion to launch officially the Centre for Dante Studies in Ireland (CDSI) at UCC. Presented by Dr Daragh O’Connell (Director of CDSI), the evening set out the rationale and contextualised the establishment of the Centre before showcasing some its research activities, especially the individual projects of the Early Career Researchers (past, present and future). There were brief research talks from: Dr David Bowe (Co-director of CDSI and Irish Research Council [IRC] Postdoctoral Fellow, UCC) –  who looked at the representation of women’s voices in Dante and his context, by comparing the figure of Piccarda in Paradiso and the poetry of the Compiuta Donzella di Firenze; Dr Federica Coluzzi (Leverhulme, University of Warwick, former IRC Postdoctoral Fellow, UCC) – discussed the issue of Dante’s reception in the Long Nineteenth century across two projects; Dr Valentina Mele (IRC Postdoctoral Fellow, UCC) – presented her current research, in which she analyses the encoding of subjectivity in the poetic corpus of Guido Cavalcanti to better exemplify some of the main traits characterizing the articulation of the first person position in Cavalcanti’s Rime; Dr Leyla Livraghi (University of Pisa/ IRC Postdoctoral Fellow, UCC) –  talked about the reception of Livy in the Three Crowns, on the importance of historiography and the rediscovery of Livy’s work for the rise of Humanism; Dario Galassini (Eduardo Saccone PhD Scholar, UCC) – provided a very brief reading of the poetry of Antonia Pozzi through the lens of Dantean intertextuality and, as was demonstrated, how she «accepts/becoming a poet» thanks to Dante, among others. 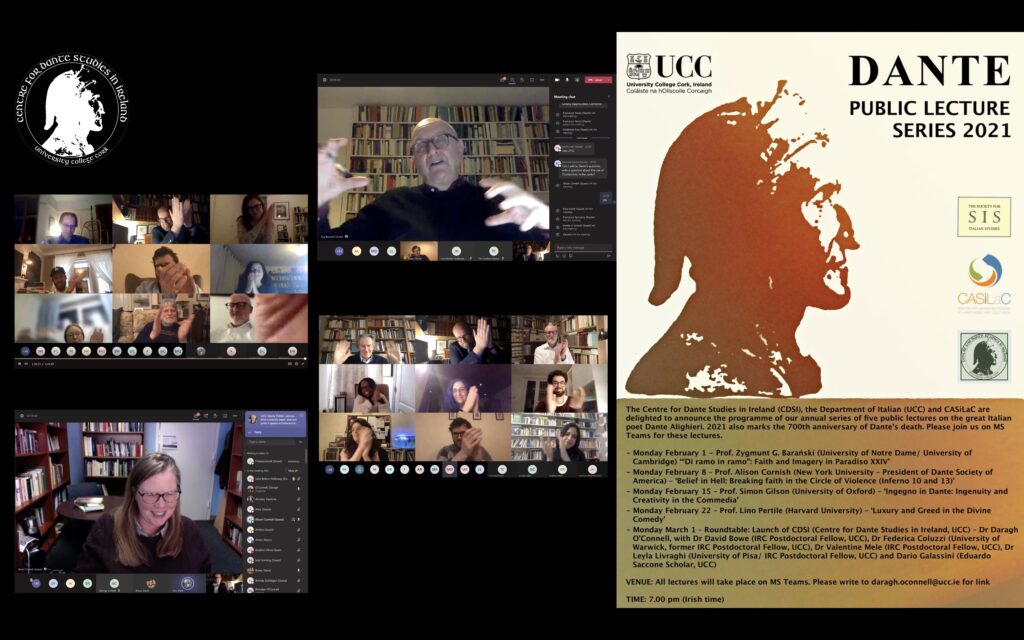 Despite the restrictions brought about be the COVID-19 pandemic, the UCC Dante Public lecture Series thrived in the online environment and embraced a wholly new audience. Each lecture was followed by lively and informed discussion. Notwithstanding the online format, these lectures were, in many respects, wonderfully intimate, and our thanks to Zyg, Alison, Simon and Lino for expertly guiding us through the month of February, and for doing so in the spirit of collaboration and friendship, with warmth and humour.

The CDSI would like to thank the SIS for its continued support, and the SLLC at UCC, the Department of Italian, UCC and CASiLaC.

Since the lecture series, the CDSI is hosting a free online exhibition of the 100 lithographs of Irish artist Liam Ó Broin dedicated to the 100 cantos of Dante’s Commedia. The exhibition runs until December 31, 2021: https://www.commediadivinaonlinexhibition.com/

It also established a Dante Dialogues Series for the 2021. Further details here: https://www.ucc.ie/en/italian/research/calendar/#d.en.1290737

To view past Dialogues and other activities of the CDSI please visit our YouTube channel: https://www.youtube.com/channel/UCGg99FrWB6lnY2ZzhaAsnrw

For further information about the Centre for Dante Studies in Ireland please visit our website at: http://casilac.ie/cdsi/